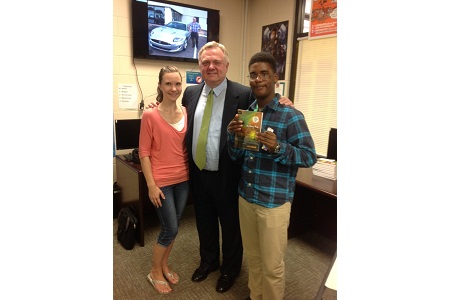 Recently, we had the privilege of hosting Rob Mitchell, author of Castaway Kid, for a series of workshops on our campus. Rob grew up in a residential group home as a child and went through similar experiences as our residents, including the aging out process. Castaway Kid is his autobiography of these experiences and his extraordinary ability to overcome his difficult past. For our residents, and even our staff at times, it can be difficult to grasp the big picture for our children as they are currently in the midst of difficulties and crises. Rob’s testimony was a great reminder of the potential each and every one of our children has and the futures they have ahead of them. One staff member shares of her experience at the workshop:

When I arrived at the Hardin Hall Conference Room for Rob Mitchell’s presentation, I had no idea what or whom to expect. I knew he had grown up in a children’s home, and that he had written a book, but that was it.  I was a little surprised to see an older clean-cut man dressed in a well-tailored suit. I think that that was the kind of response he wanted from his audience, or at the very least, was the one he was used to. He started by telling the room that he wore an expensive suit on purpose: he wanted the kids he spoke to, to see that someone who comes from a children’s home really can make it out there in the real world. Not just working in the fast food industry, scraping and struggling for every penny, but really, truly make a life for him or herself that was worthy of a magazine spread.

He then went on to say that he had traveled the world speaking at homes like ours, to kids like ours, and that he paid all of his own expenses to do so. I blinked, surprised. My mind raced, thinking of past speakers and leaders I had worked for or seen in the past. They never would have done that.

“This guy is for real.” I thought. For the next hour and half, I was completely captivated by his story.

He started his story with the memory of his mom leaving him at a children’s home when he was three years old. I felt my eyes start to tear. I wondered how many of our kids have memories like that. I remained teary-eyed, on the precipice of outright sobbing, for the rest of session. It was powerful, moving, and heartbreaking to learn of the abuse he suffered, and the feelings of loneliness and utter despair caused by his mother’s abandonment.

Thankfully, his story has a happy ending. He had a house parent who loved him (he still speaks to her to this day) and mentors who guided him through his adolescence. Most importantly was the young woman who started him on the path to know Jesus Christ; for through Him, Rob was saved and able to overcome the pain of his past. Through Jesus, he was able to forgive him family, and all those had hurt him. It is because he was able to let go of his dark past that he was able to become the successful business man and family man that he is today.

Rob is truly a humble man who cares about helping children with his story. In his story, kids, and adults, have a chance to see themselves and the hope that they too can overcome their painful pasts and build a brighter future. The rest of the room was so moved as to share stories of their own struggles. Through Rob’s story, we became bonded. I am so glad that I was able to attend and meet Rob. It has given me a new perspective on what our kids are living with, as well as what can become of them as they grow up.

Our residents had the opportunity to have their own workshop with Rob and it was an impactful as well as challenging. Many were inspired to see what Rob was has been able to accomplish facing the same things they have faced. Conversations are still happening on our campus and now several homes are reading his book together as a family and using his discussion guide to explore his story and their own even further. Rob’s visit has made a lasting impact on our campus.

For more information about Rob and his book Castaway Kid, please visit his website at http://castawaykid.com/.